Last weekend I learned the mechanics of creating a typeface.  In case you didn’t know – making a font is mind-bendingly complicated.  It’s like photo editing gone mad.

This was my result after three days of bad posture and squinting at my 15-inch laptop screen.  I was trying to find a word that featured the best fruits of my labor.  Apparently a wizened wizard from Middle Earth was the only thing that would suffice.

Oh, and then there’s pi: 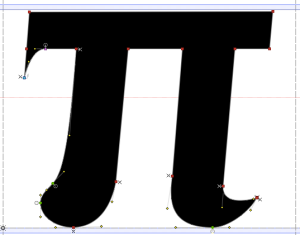 I named my font “pomme”.  It started out as “pomplemousse” but I got bloody fucking tired of typing out “pomplemousse” every thirty minutes and abandoned the idea of naming my font after French citrus.  Great workshop though; three days, 10 hours each day.  The instructors were funny.  They wore t-shirts with typography jokes on them.  We went to happy hour.  We had painfully long critiques.  People opined.  And now I can’t stop working in Font Lab.  My Doctor Who scarf, as a result, is being largely ignored.

I’m currently watching a documentary called “Room 237”.  Well, ok not really.  It’s on in the background while I’m in the midst of this feeble attempt to crank out a blog entry.  Facebooking is killing my blog.  The irony?  I pay for the blog.

I am Jack’s epic facepalm.

I actually find myself scrolling through old Facebook posts looking for ideas to blog about.

Ok, so I’m ‘sort-of’ watching this Shining documentary.  On that note, careening head-first down a large flight of stairs looks painful.  I wonder if that was really Jack Nicholson or a stunt-double. My vote is for stunt-double.  Also, whatever happened to the Big Wheel?  I had one as a kid; I remember that the front wheel, over time, developed a flat edge on a ten-inch section of the arc of the wheel as a result from braking at what would appear to be the same spot repeatedly.  The result was an audible “thunk-a thunk-a thunk-a” during normal operation.  I suppose that’s motivation to learn to ride a bike.

Something occurred to me yesterday while I was sitting at my desk snacking on  gluten-free granola from Pike Place Market and becoming increasingly focused on extracting the raisins from aforementioned bag:  just why do raisins plucked from a cacophony of other ingredients taste so much better than raisins à la carte?  Rochelle claims that Jesus would know.  I can’t say I agree with that assessment…I mean, how popular could  gluten-free granola be in Galilee or Judea in 36 AD?  Perhaps if I’m ever witnessed to I will ask them.

– “Excuse me, but have you accepted the Lord Jesus Christ as your personal savior?”
– “Uh, no…but I have a question.  Does Jesus know why raisins extracted from a bag of gluten-free granola are so much tastier than raisins on their own?”
– “So you haven’t opened your heart up to Jesus?”
– “Not unless he can answer intelligently about my raisin question.”