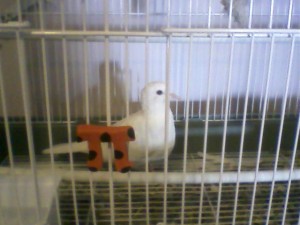 I don’t really have a name for the dove. I’ve just been calling it the “it-bird-thing”. I figured since Chilla doesn’t seem to mind being called “Chilla” so much, why the hell would a bird care what he’s called. I was calling him (it) “crazy eye” for a while, but that was far too many syllables and much more effort than I was willing to contribute to this particular avian enterprise. I don’t know what gender “it” is. I suppose I’ll just have to wait and see if it starts shooting some eggs out and make my determinations from there. I think I should put a box in there or something so the potential eggs aren’t lolling about on the wire mesh of the bottom of the cage. And then it steps on them. And then there’s crusty egg goo everywhere. Ew.

I decided to decorate the front of the it-bird-thing’s cage with some of the Pi magnets I made since I had discovered that there were virtually no ferrous materials used in the construction of my room. Not on the window frames, in the bathroom…nothing. So I thought it’d be very feng shui to slap some on the front of Casa de Crazy Eye. Problem is the little bastard has started pecking at the Pi. You DO NOT peck at the Pi. Absolutely not. The Pi is not for pecking. Bad math karma.
I should get a spray bottle and douse the it-bird-thing when it Pi-pecks. Although I think that could be counter-productive to my taming goals which is one of the reasons I was given the it-bird-thing in the first place.

The bird was formerly in the possession of a close friend of mine who also happens to be a magician. This magician had a dove population problem (amorous doves…no birth control) and would like the most recent additions tamed for use in the show. So I claimed one, agreeing to tame it.

Perhaps I could start by not calling it the “it-bird-thing”. It’s probably not helping it’s self-esteem. The visions of releasing it into the ceiling fan when it rapid-fire shits on me might be causing it undue stress as well. Although it’s wings are clipped so it’d have to be be more of a “dropping” it into the ceiling fan.

One thought on “Dove Pi”