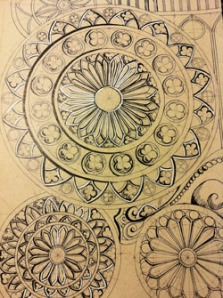 (Not sure where this compulsion to prattle off quotes is coming from.)

I don’t know if this is the bane of artists everywhere, but I find that I am much more productive when I am in a state of stress, worry or angst.  When I am sublimely happy and perpetually elated I don’t feel the least bit creative.  I’m assuming it’s because I’m feeling more sociable and don’t spend a lot of time at home in order to pursue such endeavors, but it is entirely frustrating.  I suppose it’s a testament to the quality of my life, that there are so many incomplete works in my home.  If they were finished, it might suggest a miserable and depressive nature which is definitely not a good prize.

I’m not miserable and depressed at the moment, I just have a lot of flux in my life, and whereas I don’t find it upsetting, it does cause a bit of tension, as that has been somewhat of a leitmotif in my life.  It used to be *much* worse, any slight change in my life would be cause for a Chernobyl-esque reaction.  But I have become far more adaptable in my old age.

Bloody hell, am I actually writing a reflective blog?  I’d best watch out for that fissure in the space-time continuum that’s going to engulf the world and negate all existence.  That might piss some people off.  Especially considering the fact that December 2012 is a good ways off and they might feel slighted if I denied them a year and a half of shenanigans and taxes.

Voulez-voulez-vous “All the effort in the world won’t matter if you’re not inspired.” – Chuck Palahniuk