Oh, honestly.  I mean, that’s a typographical sin! I feel nauseated. I’m not sure how I can recover from this one. I mean, I’ve seen some pretty disgusting things in my time, but this is the pinnacle. A “friend” of mine sent me the link to it. I say “friend” because their status as such is now questionable.

Anyone who knows me knows about my “Comic Sans” issues. You can read about them

to gain a bit of perspective. What perplexes me is the inappropriate use of this dastardly font.

Now, tell me this…how seriously can you take this? I mean, honestly. I think I’d almost prefer to die of coronary failure. It looks like a practical joke…you apply the paddles and a recorded voice laughs and says, “sucks to be you!”. Comic Sans = trust fail. It does seems to be prevalent in the medical realm, perhaps in order to help people feel less intimidated…I perceive it as an expression of irresponsibility. I would reject services from any facility who used this crime against nature in their signage. Or at an ATM, or a restaurant…or make me question my personal safety if someone broke into my home or had me at gunpoint.

It just screams “we do not take ourselves, or your safety, seriously”. Or about whatever it is they’re trying to communicate. It’s like a plague…seeping into the cultural consciousness like a virus… 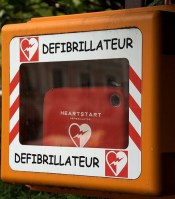 Papyrusis running an ever-increasingly close second in my font-hating inventory. I think they’re both ganging up on us. I don’t know what we need to do to defend ourselves against this typographical tyranny, but I feel it involves copious amounts of Helvetica, Arial, and maybe even a smidge of Times New Roman. Our very lives may depend upon it.